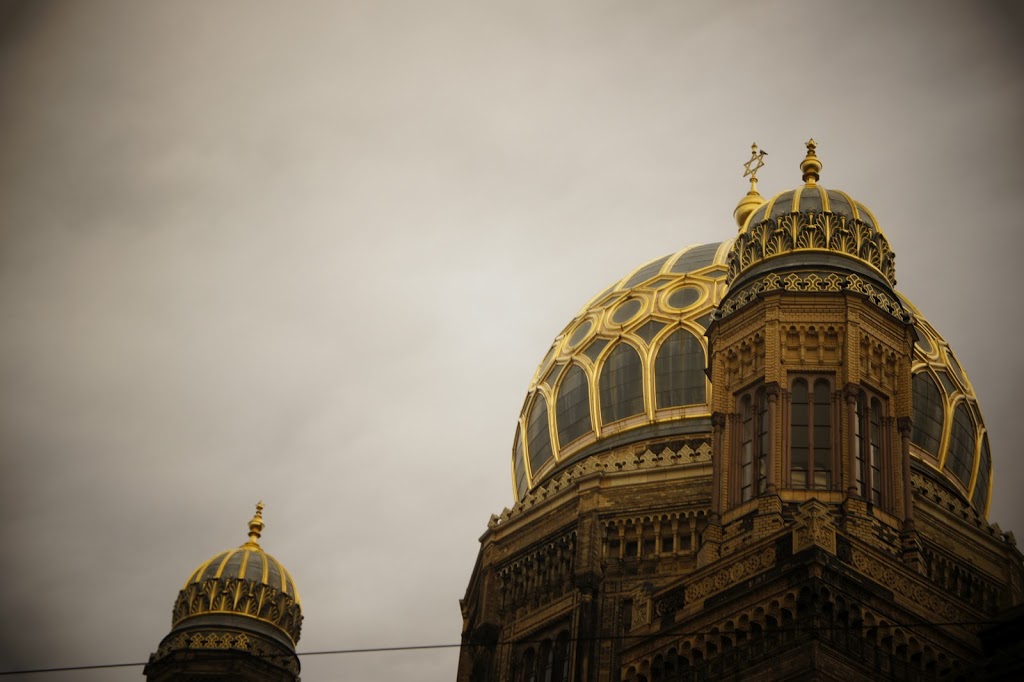 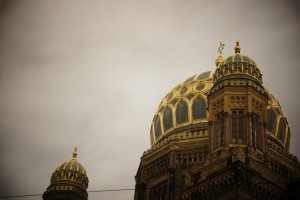 At the “100 Beers” bar a few blocks from my hostel, the bartender poured me a Berliner with foam as light and fluffy as whipcream.  The first taste made me think that perhaps what JFK must have intended to say when he said “Isch bin ein Berliner,” was that he needed a drink. 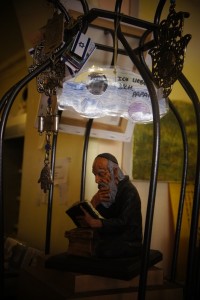 Berlin is a city of green, shady alleys, well manicured traffic dividers, a mix of blocky rectangular clone-like Stalin era buildings painted more attractive colors and shiny glass and bright in color and unique in material modern architecture as well as old romaneque and baroque leftover or restored buildings from the war. The streets bustle with Mercedes cabs, trams, and an efficient subway system rumbles below. Streets are lined with the vibrant colors of street art, creative bars and provocative museums and populated by a polite but serious people who seem at aware and at odds with history and at the same time mindful of the future. The Jews in Berlin used to be like the Jews of Cracow, the vestiges of a nearly extinct species,a gash in a rich history, but with end of the Soviet era, the rising instability of the middle east and the growing economic incentives for intelligent, well educated professionals, Berlin today has rapidly become the fastest growing Jewish community in Europe; growing from a few thousand to over a two hundred thousand people in just twenty years.

Most are Russian Jews, whose identity was formed by segregation and anti-Semitism and who remained in a place they were told was their enemy. When they first arrived, they were housed in sad and undignified halfway houses but over time, in Germany, began to re-assert their Jewish identity. 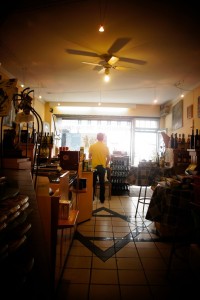 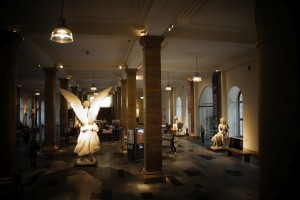 Then there are the 20,000 or so Israelis who felt like they had to leave Israel for various reasons including dissatisfaction with spiritual life, strife between various economic groups and of course security. There are a massive numbers of converts; Germans who when faced with so much information about Judaism, realized that it was something in line with their own views. As a result, there are high numbers of recent young and energetic converts that often comprise 40%-90% of a synagogue. When I sat in on a Shabat service at Orienbergstrasse Synagogue, adjacent to the beautiful New Synagogue that is now half of its original size and used as administrative office for Jewish life and Museum, I could tell that there was something different. The Rabbi and Cantor were women, yet it was not Reform but Conservative. There was singing the entire time and when there was a pause for silent praying, there was not the usual hum of voices murmuring the prayers aloud under their lips, instead there was a silent whisper that seemed eerie as wood furniture creaked around us. There wasn’t that spirit and feeling of Chabad or Conservative synagogue where people wander around and bow and keep in perfect rhythm together while being completely independent of each other. It was a certain cold feeling of order aside from the few Israelis with their children who were free to sleep or wander around and thump on the tables. Prayer in a Orthodox synagogue is not a bowing to God or to rabbi or cantor, it is a celebration, your chance to pray with other Jews. This was missing a little bit at this Synagogue, as it was missing in Cracow.
Avitall, the young female cantor with a wonderful operatic voice came up to me and said: “This synagogue is mostly converts, I thought you should know since you are writing about the Jewish community.” All of a sudden, it all made sense. That innate independence characteristic of semitic people that had been passed down from generation to generation was replaced by German values of order and structure. This was a Jewish synagogue, religiously but not ethnically. These are German Jews: creative, orderly unlike the chaotic Jews of east Europe or the free spirited Jews of Israel. I was reminded of the thing that binds us, the words and melodies of the religion and the things that make us so diverse, the culture where we live. 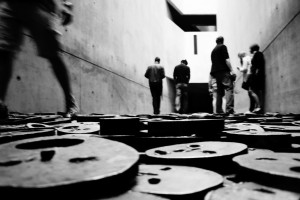 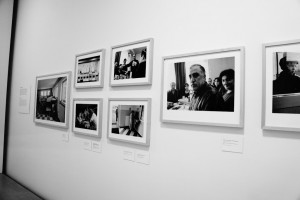 This reminded me of the Jewish Museum; a building in the shape of a scar, off to the side of the center near the Turkish neighborhood. Very much like Berlin to create an amazing museum about a culture that has been with it for almost two thousand years but always on the sidelines. Sure there are big names that rose out of the culture, but they are a small number in a very rich heritage. If Germans had allowed Jews free reign earlier, they would have contributed more, but that would have been impossible since most Germans weren’t free and most Germans were poor, to allow foreigners free reign would have seemed unfair to those who have lived and died on these lands for thousands of years without a daily prayer for a land that doesn’t exist. It was this understanding that we Jews are very lucky to be alive at this time when Israel exists, that we must not take it for granted & that we must keep it in order to not be those wandering souls who go from one country to another in search of someone who will be gracious enough to host us until we forget that we are guests, begin to take the country as our own and overstay our welcome, to then be violently tossed out. There is a confidence we have since we have Israel, and dignity. This we spoke of with Karen at Shabat dinner below the Synagogue. I was there after interviewing Avitall and they invited me for dinner as many had cancelled. It was a great, delicious dinner not unlike those I had many times in San Diego, but it was missing that direction that Rabbis have at Chabad. There is a reason so many people come to those dinners; their wives cook the meal and the Rabbi leads the community, they would be lost without each other.  They complete each other and give the body and the soul that nutrition that we must have. 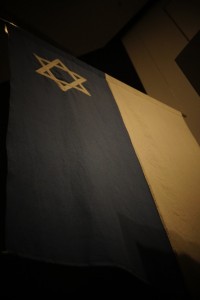 Dean sat near me with his wife and infant Son. We spoke of that painful awkwardness of living in Berlin, the place where his family lived and perished during WWII. He was born in Israel and makes his living and life here even though he visits Israel a dozen times a year.
“I am not religious, I am an atheist but I like this, I like the stories.  I like to give this to my son. Israelis don’t go to Synagogues in Israel“
“They don’t need to” I say, “they are amongst Jews.  Why should they go to a Synagogue when they are amongst Jews? ”  This is why there were no Synagogues in times of the temple when the Jews lived in Israel; they were at home and there was no reason to come together.  They were together.
“But yes, it is strange to be here and not in Israel.  We say that the Nazis tried to take us out of here, and we are here in spite of them, to prove them wrong.”
They are there to show the world that Germans and Jews and German Jews are one people and that Nazis did not define this country where a great nation gave great Jews and great Jews gave to great nation. 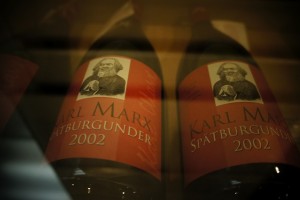 At this point he left and Anya, the black haired girl next to me with shaved side and a long braid of a lock near the ear coming down to her shoulder went to put on the tea. The other Anya, who was older, blonde and wearing glasses began to read the questions for discussions that were handed out by Karen with similar shaved side but a small curly lock tucked behind the ear. Tall, British Peter, who had thick sideburns and was wearing a green vest, a green world kippa, a green bow tie and black horned glasses, smiled as he read the questions and a sensitive, dark haired French marionette theater performer sat across me waited anxiously for coffee as her blond friend ducked out to talk on the phone. The questions dealt with pride and greed, both part of the same coin. Coins, made to better life for man to make a fair exchange between labor and product between men, for the sake of a stable society when placed in selfish hands becomes a source of hoarding and pride, which corrupts and brings down nations. The greed that crashed the stock market in 29 and caused huge unrest in Germany, bringing about the Nazi regime, the greed that brought down the American economy, the pride of people that causes them to show off what they have, showing others what they do not when they are of one people, one society. It was this golden calf that Moses nearly lost the people of Israel to, it was this golden calf that Jews prayed to and were nearly wiped off the map by God, and it was this golden calf that Jews were praying to that they were nearly destroyed by god during the Shoah (Holocaust). This is the demise of our people. At this point we spoke of the Israel, it’s greatest enemy, the selfish Israeli, the Israeli that escapes his duty, the Israeli that worships America, that uses Israel as its base and testing grounds for its weapons and geopolitical games. This is the threat to Israel. “Anti-Semitism grows when Jews stop being Jews and stop obeying commandments.” They don’t have to obey the commandments, but they have to be aware of them.  They have to be aware of what is most important to them as it is so easy to lose  what is most important and what we take most for granted.
We finished tea, cleaned up the room and I left the Synagogue, stepping into the the light warm rain of a Berlin night. The feeling of the kipa still lingered on my head even though it was off, like the memory of the lessons given to me today by all the people I came across.
Thank you Berlin, you are the center of Europe, the center of thought, the center of ideas.
Share on Facebook Share
Share on TwitterTweet
Share on Pinterest Share
Share on LinkedIn Share
Share on Digg Share