A Visit to the Settlements 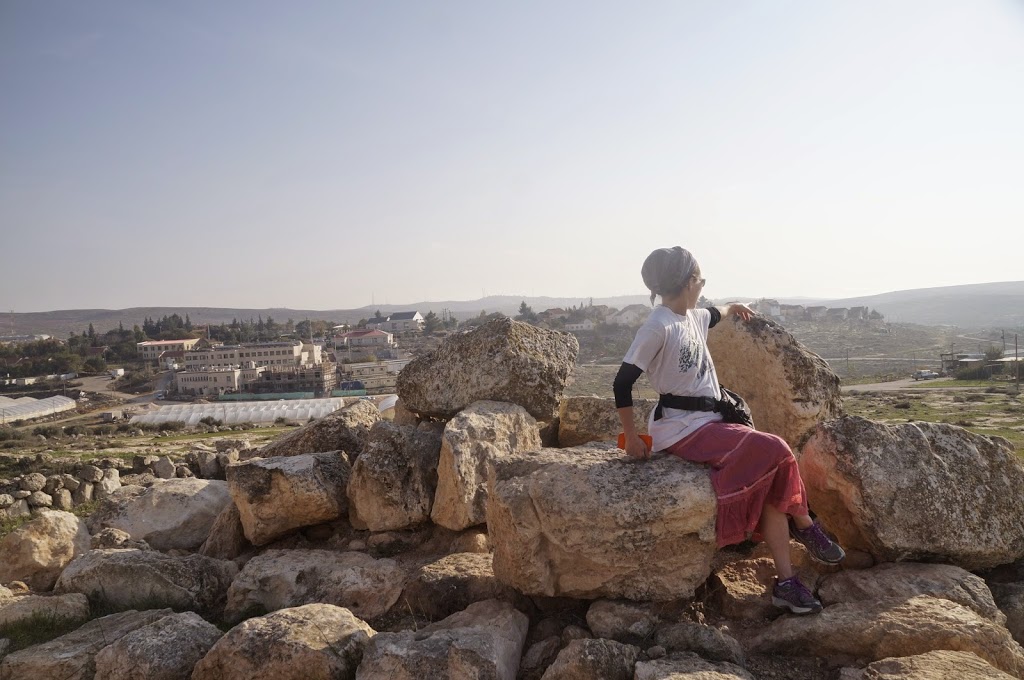 It was a most unusual heat on a December morning in the hills of Souther Hebron. The white rocks stacked in serpentine order reflected light up while the green patches in-between them soaked up the rays with light disappearing inside the ancient caves and cisterns of the old city Susiya. There is no mention of the city in any ancient texts but not far from Hebron, where lies the grave of Abraham, is a town which appeared around the time of destruction of Jewish second temple. The town grew and grew, building one of the largest and most beautiful synagogues in the area since ancient times until a mysterious collapse in seventh century.

Its originators were believed to be the priests who fled the destruction of Jerusalem, here, in exile, they hid among the hills inside the caves, created a town and here, they continued their way of Jewish life. They built ritual baths, cisterns to collect the infrequent rain, carved out caves and later built homes, plowed fields and pressed olive oil. Then, either due to change in climate or some other force, they left and left the city, until no more stayed, burying the city beneath layers of earth until its discovery by British soldiers in early 20th century.
Today, old Susiya can be seen from the new Susiya. A town near by surrounded by bedouin tents. A town with expatriates from Netherlands, Israelis and a few Americans. Religious, it boasts a large synagogue built to near exact dimensions of the old one across the ravine. In Susiya there is fire house and one fireman, a well known Yeshiva (religious high school) which is known for the warriors it builds. There is a pool and community center where Natalie Sopinsky teaches Zumba a few days a week.
Natalie Sopinsky with hair wrapped in a purple head scarf and a long pink skirt with white lace hops from one rock to another with her young son at her side, her other four kids at home with their Professor dad. She shows me their little village, she is the lawyer, the activist, life guard and the day guide. From her I find out all about Susiya that the new pioneers had built.
The town as she shows me, is composed not of radicals but families who wanted to get away from the bustle of life in the city. They make wine and grow fresh produce. Many are teachers in local schools. They had to pass interviews and tests to enter this community, including handwriting analysis. The type of people who live here are parents of the kids who become special forces. The parents here include famous Israeli heroes like the man who shot and killed the terrorist atop a bulldozer, running over people in Tel Aviv streets.
To get here one must enter the Palestinian territories and surrounding are the desert hills of old Judea and new Palestine. Every hill around here, is capped with a smaller settlement, portable homes with bikes laying out front and clothes hanging and flapping in the Negev wind, the Negev desert stretching south as far as the eye can see, while in the north, white Palestinian houses with black cisterns dot the hills.
Some residents cary guns, while kids roam the grounds unescorted, leaving their bikes laying out front since there is no one here to steal.
Israel Feld, the patriarch of the town, with his thick beard, t-shirt, large kippa and Teva sandals greets new comers. He came here from United States in early 80’s to be a farmer and became a father here twelve times.
Are they afraid here? Does not seem like it as they are often seen hitchhiking at the bus stops. But unafraid does not mean they are not wary; watch towers are always manned and guns are at the ready, even if last attack had been over 13 years ago.
Do they worry about dismantlement that my come one day with peace or war? “We don’t think about that. We do not wait and see, if I did that, I would have never gotten married either.” Natalie tells me. They live each day and enjoy each day and take whatever good and bad comes with it. Working for the good, preventing the bad and learning all there is to learn along the way.
Centuries after the old Susiya fell, the new Susiya is alive again, with the same fervor the original had had, when it sprouted here at the edge of desert and the Roman province, where people came to live a free and spiritual life, to provide for themselves, their kids and find a little heaven in the hills.

Note from Natalie Sopinsky:
Yeshiva High School is specialized in Environmental Sciences teaching students about environment and conservation. It is also one of the most efficient and eco-consious minded structures with no need for artificial light during the day, solar panels and energy saving constructions.