Stay At Your Own Risk 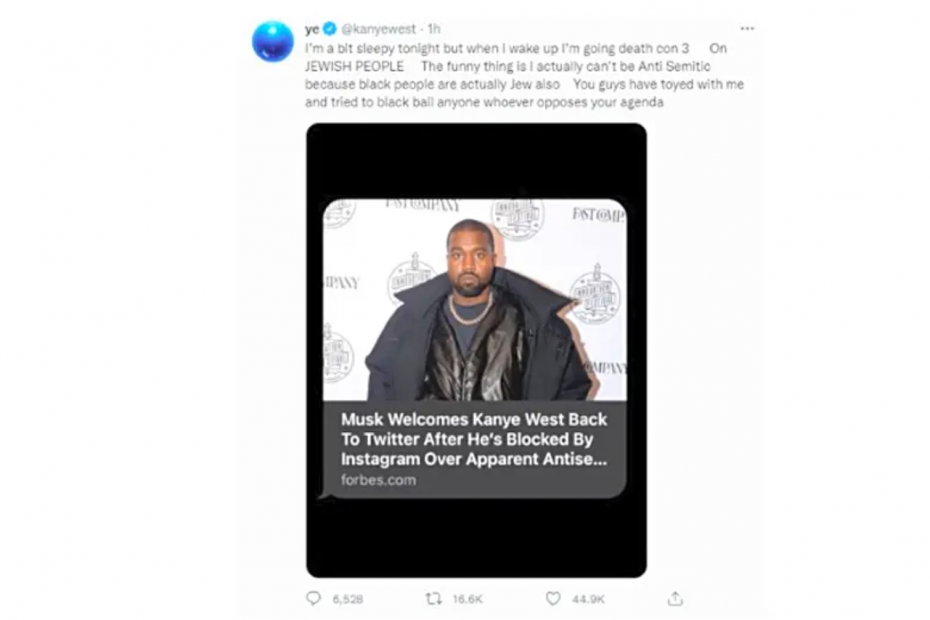 So when organizations like ADL report on the rise in antisemitism, the number isn’t important as much as the growth and the trend. The trend shows how acceptance of antisemitism is growing, which also means the ability of people to speak up about it is actually decreasing. What we are witnessing is the analog to the antisemitism progression seen in early 1930ies. From acceptance of words, from the reduction in rebuttal to the lies, to increase of violence, decrease in prosecution and finally Jews becoming illegal people. Surprisingly, in America, this is happening without any state intervention, it is happening organically.

Jews are not yet illegal, but with the new tweet by Kanye West, Elon Musk embrace of that hate and the lack of response from the American public shows one thing, the progression for the Jewish people becoming persona non-grata is accelerating at break neck speed. We see that Jews are not accepted, instead the Jewish people are tolerated. Jews are generally used by corporations, government, academia. However, in one generation we have gone from BDS protests to blatant expulsion of Jews from positions and from offices for one reason: they are Jewish, and that is accepted as a valid reason. Any Jew who is perceived to have sympathies to Israel is now a target. It is a litmus test that need not be true because simply the fact that 95% of Jews support Israel means you can apply this to all Jews and feel confident that there will be no rebuke or reprisal.

The fact that Jew hatred masked in anti-Zionism is the one and only item of commonality between white extremism and progressives should not “worry” Jews, or “horrify” them, or “alarm” them. All those words are empty. They don’t mean anything. They don’t provide an action. There are only two actions that can be taken when it comes to any attack: fight or flight. The recent meteoric rise in verbal and physical attacks should either get Jews to fight and protest the antisemitism, or make them flee this country. Unfortunately, it may be too late for the former.

At this point, I’m sad to say that all Jews living in a country with the second highest number of Jews in the world after Israel, should feel about as secure as those who lived in the country with the most Jews in 1939 (Poland): very uneasy. Kanye West tweeting antisemitic assault on Jews, getting 50,000 likes and retweets and not loosing any followers and Elon Musk welcoming that should tell us that the 100-200% rise in antisemitism is about to go meteoric. In a country where there are more guns than people, a call for open war on Jews is going to be accepted and taken seriously. The fact that the tweet got virtually no blowback should tell us that this country, our country (for those of us who are US Citizens) has no interest in protecting Jews and does not see Jews as Americans who have a distinct Jewish identity and have a birthright to every legal protection that all Americans have. All that those fans of West and Musk see is a trope, one that can be attacked with impunity.

When I got my Israeli passport, I felt liberated. For 25 years I lived in America never feeling fully accepted and never having another place to go in case something happened. When I got my passport, I finally had a home. A home that is far from perfect, a home that isn’t always safe, or lucrative but a home where I felt that I belonged. Israel is a home where my history is not up for debate and my safety is something to be taken seriously and addressed.

I felt that same way when I arrived in America and my first ten years. But I no longer feel this way in America. When I say I’m Jewish, I feel naked. I feel that I am judged and I don’t know where the attack will come from. I feel that my days of carefree safe life are at an end.