Bob Saget and the erasing of the Jew. 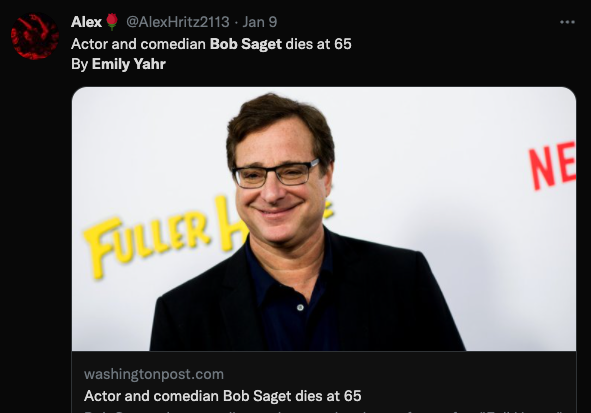 It is very easy to make Jews evil when Jews who are loved by all, have their Jewishness erased.

When I have a feeling that someone is Jewish, I often go to Wikipedia. The bios in “Early Life” portion always mention the ethnicity of a person, be they Persian or English or Jewish, and on which side. It is a basic and obvious thing to do to give credit to the person’s culture, especially if they identified with it.

I recently wrote an article where I used data to analyze how Hollywood white-washes Jews by having Jews perform in Jew face, but it wasn’t until I read the Emily Yahr Washington Post article about the sad passing of Bob Saget that I realized that the Jewish erasure is not restricted to movies and Hollywood, but to American wider culture as well.

Here is a man, who has gone on record many times talking about his Jewishness. Talking how he used to be attacked for being Jewish, a Jewish positive role model who is another Jewish icon of American comedy has his 3000 years of history erased with one line “hails from Philadelphia”. Yahr posted quotes from several celebrities but had no interest in researching the man, or even tweeting the article to her followers.

Jewish people often ask why 80 years after the Holocaust, the lies that created the Holocaust still persist, why over 40% of Americans feel that Jews are too powerful, that Jews control banks and Hollywood. Well here is the reason, in one article. Because if Jewishness is only mentioned when the person is Epstein, or Weinstein or Madoff when the only time people see a Jew if it is Chuck Schumer or Adam Schiffer, then of course the stereotypes will persist. When Jewish culture is reduced to a single holiday around Christmas and awkward boys on Bar Mitzvah and every time you see Jews on TV it is because of a terrorist attack or a war in Israel, then, of course, people will have a view of Jews that fits the stereotype, because that’s the reality that they are presented, that’s the reality that is easy to present in a country where less than 1% of the population are Jews.

This country has a problem with education, we know that. The fact that we know so little about our original inhabitants and how they were cleared, about slavery, about Latinos and Mexicans, about European immigration, means that of course, we will also lack education about Jews, a small but visible minority about whom there are so many opinions.

Two years after I arrived in America I had the one and only lesson about Jews in my Social Studies class. It was less than five minutes of a class, where it was mentioned that Jews are “Chosen People” without being given context for what that means, that they believe in one god and that 6 million were killed by Germans. When Holocaust is described, the education focuses on what Hitler did and the lies he spread, not on who the Jewish people are. There is no information on ancient Israel or Judea, on the Torah or Roman conquest, on the world diaspora and Jewish contributions over the 3000 years.

When there is a vacuum of information about a people, something will fill it, and it won’t be good. The fact that even a paper like The Washington Post, would not bother mentioning that Bob Saget is Jewish, let alone offer context in any of the pieces that deal with Jewish topics or Israel, is the reason why attacks on Jewish people constitute the majority of religious-based hate crime. It is why Israel is the largest focus of media attention when that conflict pales in comparison with most other conflicts in the world. It is why Israel is a flashpoint for antisemitism in America. Because when we ignore the good news, the bad news simply reinforces the stereotypes and the lies. And as long as that is the case, hate and antisemitism are here to stay.

So it’s not the David Dukes or the Luis Farrakhans that we should worry about, its the millions of Emily Yahr’s and her editors who ignore us and erase us at our best and highlight us when we are at our worst.