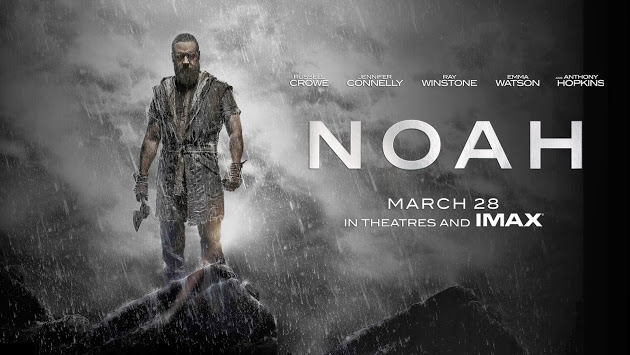 Ever since Pi, Darren Aronofski has been my favorite director. Every movie since has made me admire and like him more and more. His Jewish heritage certainly makes me especially proud to have at least my genetic history linked with him.

When I heard that a new movie is made about the biblical story of Noah, I laughed. When I heard it was made by Darren, I stopped laughing and listened. If he makes a movie about it, there must be something I missed.
What did I miss? Well, the flood, it was created because of man’s wickedness. Who was saved, Noah and the animals. Here is our wickedness, our assault on the environment and war with each other, here is Global Warming that is coming, here is Noah who no one believes just like during Global warming when no one is believing it in spite of all the signs. Who does Noah save? The animals, he is the first environmentalist. Why does he save the animals? Because without them, humans have no chance, all of them are necessary for our survival and he had to save them to repopulate the earth. Afterwards, he knows he and his family is alone, all are dead and he gets naked and drunk, so sorrowed by the fact that to save man kind he had to let all those he loved die so as to make room on the ark for animals.

While I travelled, I met many wise religious people, who laughed at global warming, who laughed at science. Wise people who have read the story of man’s folly and who should know that we are the people who are living a second chance. This time there will be no ark, no Noah, they know this because they have read the story to their children countless times, and yet they laugh at the signs, the evidence, the scientists who are the Noah’s of today, missing the parable, the lesson of Noah.

I hope that this movie will spring these wise and learned men and women of God to do that which God has asked of Noah, that they save all animals and people of the earth instead of laugh at scientists, re-condemning us to the fate of the mistakes of our fore-fathers.

You can listen to the full interview between Mr. Aronofsky and Q’s of CBC Jian Ghomeshi which sparked this post here .