A compact but accommodating man, Ezekiel Melakar of the New Delhi Synagogue near the bazaar subway station picked up the phone.
“Hello! This is Sam, the Jewish guy” I said, “Can I come see the synagogue today?”
He agreed to meet with me on short notice.
I arrived late after catching a brief breakfast at the Chabad; tucked away in the backpacker district, hidden inside an alley way among Israeli shops. After circling the well-manicured streets, the rickshaw driver finally found the small compound behind a tall wall. Ezekiel was having lunch and had changed from his parade clothes expecting from me a no-show; unwilling to pose for a picture in his cotton white pants, white shirt and sandals.
The synagogue was a small blue one story building. Inside, chairs lined the walls and a grapefruit tree in a pot was near the Ark. The Beemah, small compared to other synagogues stood in the center facing the Ark in the corner.. 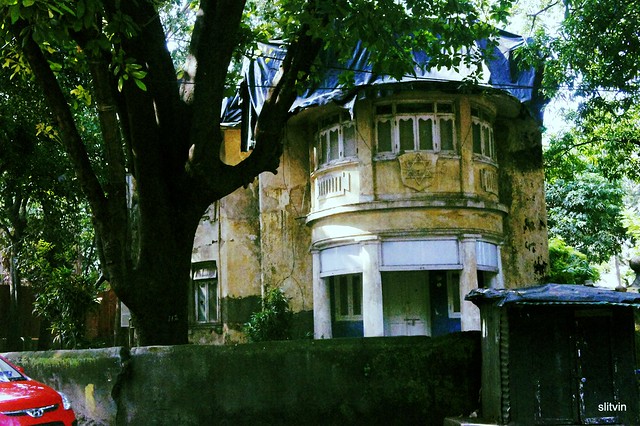 He was visibly upset but at the same time invited me to stay for Yom Kippur. After just a few pictures I headed for the backpacker part of New Delhi on the clean subway with clearly marked “no spitting” signs. Packed inside, the only foreigner, an engineer from Jaipur attached himself to me and we caroused the Red Fort, tried out sweet drinks of Delhi streets and he helped me get to the train station to catch my train for Jaipur and even got me a sandwich. I thought he was helpful to foreigners but he may have thought something else.
On the platform waiting for the train was Dav, an Englishman of Punjab descent. He looked very Indian but his mannerisms were English and his Newcastle accent made him entertaining and a great conversationalist. We were in the same car and talked about his luxury laundry business in Newcastle, his addictions and his final escape from a life of mundane by trusting his business to a manager and setting out to travel the world. At this point he traversed Russia on the trans-Siberian to Mongolia and China. As we spoke passing slums of Delhi seeing private Indian life on display, a young man kicked me out of his seat and I spent the rest of the ride playing with kids and my camera in the designated seat.
By evening we arrived in Jaipur, the pink city. Nav had a reservation at a hotel and we decided to split the room. After being talked into a cab ride by a smooth rickshaw driver, we set out for the lavish room that awaited us after eating at a hotel rooftop restaurant and splitting a couple of unappetizing Kingfisher beers.
Next two days we spent being driven around by our rickshaw driver. He was a well dressed man, thin and average height with polished European shoes. He unemotionally and calmly told us of his little family and his conquests over easy tourist women. He showed us the quiet grottoes of the kings of Jaipur, Sun temple over run by monkeys on top of a mountain with a view of the valley and the king’s tower overlooking pink city. We had a few delicious meals and after I went to the train station to make my way for Mumbai.
Not all is always so easy. There I realized I booked a ticket for the next night, came back to the hotel and had a good time with new friends at the hotel and wish Nav a safe trip to the spiritual city Varanasi next morning. It was my luck to stay another day to see the Amber fort and the royal observatory court where dozens of sundials stood to calculate the trajectory of Earth with second precision by gigantic structures that are hard to imagine built so long ago.
Next night was spent on a train listening to the Alchemist on random and by morning I arrived in Mumbai where a couch was awaiting. I had good directions from David, a Catholic Indian of how to get to Bandra and I arrived thanks to kind help of a stranger on a bus. Bandra, where some of the elite of Bollywood live, is home to an old synagogue that was boarded up.
David’s place was situated minutes walk from the beach. It was a nice one bedroom bought for him by his brother in America; throngs of couch-surfers come through the apartment every week. Like the a couple from England that biked their way to Istanbul, flew to Mumbai, would bike to Goa and then fly to Australia to work as a nurse and him a bee keeper. as night arrived,
After a quick shower and introductions, I headed for center of Mumbai to get to the main Synagogue for breaking of Yom Kippur fast, day of repentance. It wasn’t easy to find but ultimately, with help from a music playing college student and intuition, I made it to a fortified building with armored cars in front where I was let in to see the end of kiddush.
Indian and western Jews were in the main two story hall; rectangular and blue and white with a giant Ark for the Sefer Torahs. The Indian Jews dressed in all white kindly invited me to head downstairs where a full spread of food lay including chai tea, samosas, naan and other Indian sweets. It just so happened that this was the very synagogue attended by Ralphy and Yael Jhirad, the couple I was directed to by radio host Marc Friedman when staying in South Africa. I was invited to tea the next day with Ralphy and a couple of Israelis who Ralphy. After tea, Ralphy dropped them off at the Mumbai market, a sprawling bazaar of enormous proportions while he took me on a tour of Jewish sites across Mumbai.
We talked about life in India, how he makes “Alija” several times a year to Israel, how Jews, shipwrecked in Cochin, came to live in India and how Sassoons expelled out of Baghdad arrived in Mumbai and built a fortune and an empire as middlemen, traders and Heroin sellers.  The money they made stayed in form of schools, factories and monuments like the Gate of India.
We visited schools and synagogues, hospitals and homes of Indian Jews who were doing well and some who were doing not so well but well enough with the help of the community.

The Jews of India never felt the persecution that the European Ashkenaz felt, possibly because of the nature of the country or maybe because they were more Indian after thousands of years. In a country with some of the largest and oldest religious diversity, it is easy to imagine relatively calm life for the 80,000 until the Pakistan-India split.
When the state of Israel formed, the Kolkata and Cochin Jews left and only a few thousand stayed in Mumbai and Ahmdabad. A few villages where Jews compose the majority still exist on outskirts of Mumbai.
That afternoon I met up with Lera, a half-Jewish Bollywood actress I first met in Kiev when applying for my Visa. We spent several days, going to a Synagogue near the largest laundry in the world and the slums where the workers live. Along with David we went to Jehu beach to see Hindus send off Ghanesh idols into the sea as well as walking through malls and slums of Mumbai. As always, there is a bitter sweet feeling with India. The chaos makes you want to leave but the chaos tugs at heartstrings like any passionate relationship. I didn’t want to leave but I made it on the last train out to Kolkata, buying the last seat on the train with just enough time to spare for a last cup of chai.

My laptop broke on the train and with nothing to distract me, I laid on my giant first class cot, thinking back over the last few days of Mumbai, before taking out my screwdriver set and extracting a loose spring short circuiting the RAM chip.
The train sped along at 100-120kmph, doing its best to get me to the airport on time to fly to Bangkok for my southeast Asia tour. The train stopped as I napped, a broken hub delayed us by four hours and we were lucky to be alive and not derail. I was lucky that the car with broken hub was three cars behind and not in front.  I watched passengers walk off the train to wait for next days train and thought of the train in Jules Verne’s “80 Days Around the World” and like in the book, I made it in the nick of time to pay exorbitantly for taxi to the airport where I was upgraded to first class free of charge. The plane took off for Bangkok, but my heart stayed, there down bellow in India like heart of a traveler in a Sahara oasis.