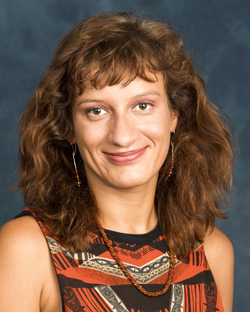 It was a hot day in New York and I needed 15 minutes to kill and WiFi. The only thing near the offices of Tablet Magazine was a McDonalds and when I walked in, I saw a tall skinny redhead in a long purple dress with two giant suitcases. “She has to be part of the Tent Journalism” I thought. New York is weird but this woman, in her mid to late twenties looked extra weird, writer weird.

Twenty minutes later we were introduced on the fourth floor of a New York office of Tablet Magazine. This was Jana Mazurkiewicz and she is clear evidence that things that Kurt Vonnegut made up are true, because the two of us are in a Cabal working on making Jewish cool again.

Jana left Poland for Lithuania when she finished high school to study Yiddish. She found out that she was Jewish and somehow that gave her passion to learn this strange “dead” language and revive it like a doctor standing over a flatlining patient. She studied it in Lithuania and went to Michigan to pursue a Doctorate. Somehow, me, the vagabond photographer and wanna be journalist and she a “Yiddishist” were now at a fellowship at the Tablet surrounded by actual journalists. We stuck out. Me with my attempts to impress everyone and her with not giving a care about anyone or what anyone thought of Yiddish. A week later, after much lox, great lessons on writing, dancing and late night singing at the NYU dorms, I went back to San Diego, working to publish my book and she to Michigan to work on her doctorate. I thought that I would never see her again.

A couple years later, I get a Facebook message, Jana is moving to San Diego and she wants to hang out. She hosted my wife and I at an Airbnb where she dog-sat and described her vision of a Yiddish club. I’ve started my fair share of crazy clubs and organizations including an Adventure Club, American Wrestling Club in Tel Aviv and an Optics organization, but this seemed just too crazy. Who would care? Who would want to know about any of this? To my surprise, quite a few.

Of course I put Jana in touch with a few people in San Diego, and in the next year she created a Yiddish cultural phenomenon. I should have known, a woman that moves to another country to follow her passion is not an ordinary person, that kind of person creates something that others seek to follow. Her events that she would put on at the Costa Verde apartment club house would bring together artists like Yale Strom, writers like Donald Harrison, and scores of other young and old. There would be food, there would be music, we would watch the plays she produced and mingle. By creating this club that brought back a “dead” language, she did not bring back a language, she brought back an ethos: a thousand years of literature and culture created by Jewish people who lived in Europe. It’s like Talmud says, a person dies twice, first when their body and a second time when the memory passes on. This is what Jana did, she refused to let a few black-hatted communities have a monopoly on a language and history of Jewish people, our evidence of existence in Europe and our evidence of living and creating and adapting.

Today is a special age. We have Amos Oz, a man that took Hebrew, a resurrected dead language and wrote Nobel Prize winning literature in it. But it was not so long ago that Sholom Aleichem also wrote world changing literature in what was considered a backward dialect. Jana reminds us that there is no such thing as backwards or forgotten or dead, there is only human talent and the desire to seek it out and share it.

I got married, moved to Israel and two years later, moved back to San Diego. In that time, Jana and YAAANA (Yiddish Arts and Academics Association of North America) did not sit still, they were as energetic as Jana’s daughter, who she had with the nephew of a Professor I worked for in College and good friend of my uncle (we’re in a Cabal I tell you). Together the three of them and their faithful members are resurrecting a Yiddish House and a Yiddish Festival but more than that, she is creating a Yiddish ethos, a Yiddish reality. This is not a revival, this is creation, creation of new music, new poetry, new plays while also bringing back the words and music and thoughts of Jewish men and women, who have long passed.

San Diego does not on the surface have much culture, to most people, we do not produce a lot that adds to the intellectual capital of this country. But San Diego produced Tom Watts and now YAAANA, thanks to Jana Mazurkiewicz.

Check out the Jana’s YAAANA FESTIVAL OF YIDDISH CREATIVITY , I can promise you, that you will not be bored, and you just might witness, cultural history in the making.