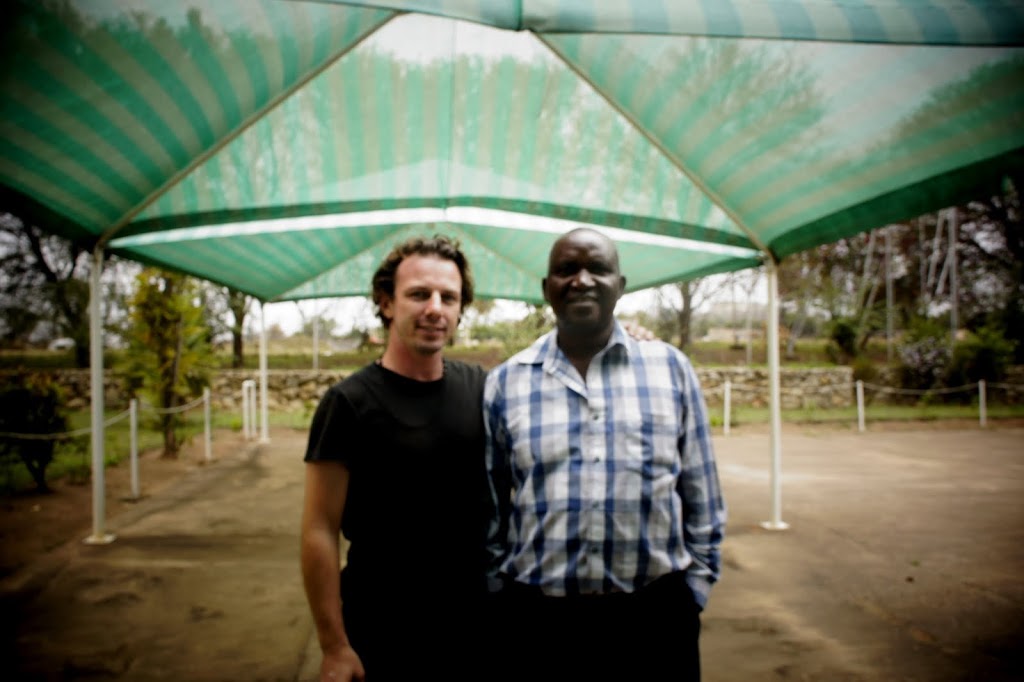 The utmost highs and lows, made this article one of the hardest to write. South Africa is arguably the most orthodox Jewish place on earth, located in a place that probably has the biggest rift between rich and poor; people of even modest means live so far above the poor majority, that fear of crime created by economics but blamed on race grips the population.
Maseratis drive on perfect roads past squalid townships into 21st century malls. Tall walls with electrified fences circumspect neatly trimmed lawns where black hungry day laborers just like San Diego Mexicans lay in wait for someone to drive by and offer work. Years of apartheid mentality left deep scars that even after eargning freedom, hate continues to simmer.
Fear grips to such extent, that taking pictures outside a synagogue on high holiday may be reprimand in some places but in Johannesburg, it can earn you a night in jail and possible charges.

When I arrived, it took twenty minutes of phone calls to find a Rosh Hoshana dinner as some suspicions from local Jews of a US photographer got weary no’s but it was as if it were meant to be when the right person, Herby Opland offered for me to join. This environment makes South Afrikans whether English, Zulu, Bower or the Jews from Portugal and Lithuania a tough people. Among the newcomers, there are new newcomers and there are the old newcomers.
It is not well known that the oldest newcomers are the Hebrews that came via Ethiopia thousands of years ago and settled in Zimbabwe, Mozambique and Limpopo region of South Africa. They found survival in a far-off foreign land by helping native tribes that in return allowed the Lemba to stay and retain their customs and traditions. Even though they were living among those who  lived by a different code, Lemba remained loyal to traditions of kosher food, a single God and a Semitic culture. Much can be learned from them by Jewish diaspora. Lemba are one of the few Jewish diaspora that in spite of living among hostile and often un-sympathetic hosts, were never forced to leave but instead stayed and thrived.

At first they were farmers, potters and blacksmiths. Later they opened mines and businesses and shops and today they are doctors, professors and business men of the region; highly educated and highly driven, they do their best to better their community and community around them.
They call themselves the Lemba and genetic testing has shown them to have the Cohen heplotype. They, as pre-talmudic Jews would, which means that they are strictly patrilineal and do not have a synagogue. Praying at home and coming together from around the region in the town Elim (place of God) every year for Rosh Hoshana as did the ancient Hebrews had come together in Jerusalem.
It is not their concern if they are not considered Jewish by Halakha (Official religious law) or the establishment in Johannesberg (when I told Shimon, an important man in Jo’berg Jewish community that I was going to see the Jews in the north his response was: “There are no Jews in the north”), but as far as I could tell they are every bit Jewish as anyone I have met so far.

There are two other groups that I discerned while in South Africa. The Bohemian artists like Herby I met through my gracious muslim couchsurfing host Aniesa. Herby belongs to the group of those who fought and continue to fight for equal rights. They see the differences as empowerment and not a place to hide and religion as a thing to celebrate and not a shield. Herby helped Frederic Brenner make the South African portion of the book Diaspora (a french Photographer’s twenty year project to photograph the Jewry of the world). Because of people like him and friends of his South Africa today is a better place for all South Africans. No longer is there secret police taking people away, no longer are there bitter fights between pragmatic parents and idealistic kids, no longer is SA a pariah state and no longer are people tortured and killed for their skin color. It is far from perfect and the backlash of apartheid days are ugly but are to be expected. An exsodus of Jews and other whites left SA after apartheid fell, some out of fear, some out of economic downturn and some out of instability. But driving around in South Africa, taking busses, picking up hitch hikers there was one thing that is needed to bring the country together, it is the collective attitude to become one of respect and dignity. That would be done through education reform and infrastructure so that scragy townships no longer exist in a country where standard of living allows for some to drive luxury cars, eat nice meals and own beautiful homes and where schools of poor look like prison yards. This is why they say, South Africa is a cousin of America, as shown in a speach Robert Kennedy once made in South Africa. But things do seem to get better and I have hope that this will change, that those who stayed are those who want to bring change.

Of those who left SA, many belonged to another group of Jews I met. That is the group that I met at the Synagogues. In a way, there was a veil of Judaism without quiet understanding what it means to be a Jew. It seemed as though they drove to Synagogues on Shabbat for the community rather than from a religious motivation.  At one point, during Rosh Hashana eve, Greenside Schul Rabbi spoke vehemently against killers of a Jewish family. There wasn’t a thought to why the killing happened, killers were simple monsters. There was no thought to the plight of Palestinian families. The tone was of reprehensibility to Jews who sympathized with families destroyed on other side, to those Jews that showed love and consideration that Talmud speaks of. His passion, his instilling of hate and his instilling of fear into the hearts and minds of parents sitting there with kids was unlike I’ve seen anywhere else. His anger came from fear, from ignorance from lack of control. He did not seem to know, at that moment, what it means to live the code written by Moses. Isolated geographically and in the mind, many are rich, some beyond deserving, still reaping rewards of an unfair system and knowing deep inside makes them very angry, greedy and unhappy. They are often robbed by the poor and so, they live in fear behind electrified fences and ex-IDF security. They don’t deserve to be robbed of course, but as Salman Rushdie said of another writer who “didn’t deserve sympathy either.”
They are at the edge of the world and are afraid of terrorism in far more than those living in Israel. I realized that no matter how nice a life can be created and no matter how nice the surroundings are, it is a terrible thing to live in a class divided system. The economic freedoms, the multitude of places of community and worship do not seem proof enough for them that this place is more than good to them and that it is their duty to give back to those who made this place possible for them to make a home. One day, those last holdouts of tradition may realize that as long as they live in a place of violence against women and abject poverty for kids, they will always be the Jews who are resented, that although they go to Synagogues, they do so without hearing most important lessons of a Jewish life: love thy neighbor, love thy God and be a blessing to this world. There were plenty of kind and nice people who shook my hand with smiles in the synagogues. But as in Lithuania and unlike in other countries, there didn’t seem to be an interest in asking who the stranger is and where he came from. It was a Lithuanian community and transplanting to Africa and Africa did not seem to change it much. Cerebral and a little cold, taken from one pole to another. But those who want to see what Lithuania was and what it would have been had Nazis not come to power, can go into the Synagogue in Jo’berg and hear the choir of men sing in rich baritone, they can see the Rabbi speak with vigor and action, even if I don’t agree with him. You can see their art, their businesses their ideas of scholarship and learning. Inside King David school, plaques with names of those with best Integrity are on the same wall with past Chess Champions and Rugby Captains. It is thanks to the hospitality of South Africans that a rich Jewish tradition and culture lives on.

That is Africa, the land of vast dualities, of poverty and riches, of kindness and ferocity, of civilization and utter wildness; the place at the bottom of the world where Black Jews and White Jews, Conservative and Liberal Jews, Religious and non-religions Jews make a home.

Back in San Diego, I was working as a Christmas Light installer, trying to earn for a trip to South America. One day, working on a magnificent giant house with a beautiful view and an infinity pool, I heard the owner’s slight South African accent as we were leaving. She heard mine. As we talked for a bit, I found out she left twenty years ago.
“That was a hell of a time to leave.” I said
“I know, it was before things got bad… I mean..” she tried to re-word what her mouth gave away.
‘You mean before black people gained rights and you would have lost all this stolen wealth…’ I thought to myself.
Needless to say, I didn’t get a tip. I don’t know if she was Jewish, I didn’t want to know.

Karma does exist, it follows children and grandchildren and citizens and kids of citizens of places that transgress human conduct. Germans are paying for it, Japanese are paying for it and today, South Africans are paying for it. While South African Jews did more than anyother ethnic group in South Africa to end apartheid, they still did financially well and that Karma still seems to follow them, earning no more love from the natives than if they had done nothing. Bad karma is a tough thing to loose especially when things are no better for the poor and you are still reaping rewards of a life that was gotten through oppression.