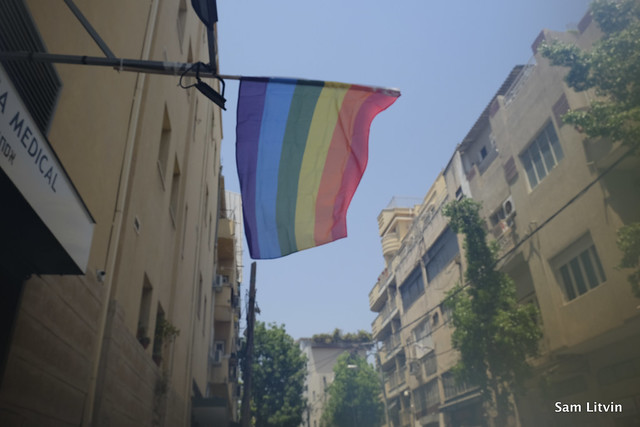 1 It’s bigger
The enitire city turns up to support Gay people of Israel and the World. It is unbelievable and the whole city is dressed in flags for weeks before the event. Looking both ways at 250,000 people was unbelievable, the sea of humanity at the parade and then the party after. The support, the atmosphere, it was bigger in every sense of the word.

2 It’s more international
All of Europe and Middle East flies in for it. You can see the flags of every country. Gay people around the world are celebrating the freedom to love and express that love. As far as America, I saw American flags as shorts but not one American flag was waived. There is no respect for America because there is no more pride in being American. It’s very very sad.

4 It’s on the beach
While people walk down the street of Hillcrest in San Diego, in Tel Aviv it is a walk down the beach. It feels amazing to see the ocean, the beach and a huge party that makes it more like Carnival in Ipanema. The wonderful thing about it being on the beach is you can go and jump into the water! And it felt so good!

5 The party at the end is free and huge
In San Diego you had to buy a wrist band to go in and pay for expensive alcohol and listen to bad music. It honestly isn’t very good and the only benefit is expensive food stalls. Here the food was limited but the party was immense and all of it free!

6 No BDS idiots.
There are no BDS assholes waving flags and chanting anti semitic slogans who under the auspices of helping Palestinians are there not to support gay rights but to support the repression of gay people in Palestine and a genocide in Israel. Not every gathering is about Palestinians. It’s gay pride! Not a free Palestine rally!

It was a hot hot day in June and it was a godsend to be able to buy water on the street.

8 Everyone Walks and Dances
People aren’t standing on the side watching the procession of lame businesses and organizations passing by and politician photo-ops. It’s a celebration and a party and everyone feels that they are part of it.

9 Alcohol is allowed
American dry policy sucks. You can’t drink! You have to be carded and here, nada, the id policy makes sense, when someone is younger than 18 don’t sell but you are free to walk around drinking. People are responsible when you believe they are responsible and the police quickly take care of those who are not.

10 It feels more inclusive
Gay arab, palestinians, muslims, Jews Christians come from around the world. You can see the Christian church of Jaffa and the mosque on Ha Yarkon as the procession passes it. Muslims in hijabs are on the beach and do not seem bothered and the secular ones are part of it. Jews with skullcaps mix with arabs and Europeans with Africans and people from Asia. Straight, gay, trans, everyone feels the love.

The one way it is not better: the few stupid people who brought their poor dogs into the heat and onto the pavement. Very inhumane.