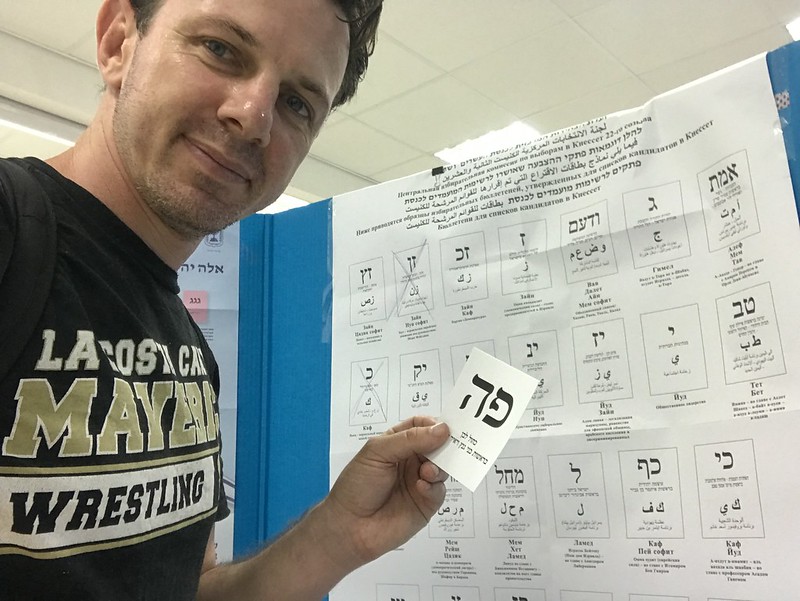 This month Israel voted, again. For the first time in three years, I could not vote. I was stuck in US, watching the election unfold. It was not as exciting as it was when I was in Israel. I wasn’t at the polls helping campaign for Benny Ganz (whom I saw at a Men’s event in San Diego so many years ago), I didn’t get to put the ballot in, but I did pay attention, and I did think back to what it was like to vote.

So for you English speaking people who might be interested in how a democracy tries to pick a government (unsuccessfully but peacefully) here is a post about how it goes. First I’ll go over the mechanics of voting and then over what’s going on with the elections.

First, election day is a holiday, most people don’t go to work. This is in part because the only place where Israelis could vote back in the day are schools. No school, no work. People spend the day going to parks, relaxing with family and enjoying the beach. Some in Israel have joked that maybe this is why they don’t elect anyone, extra holidays!

When you go in to vote, you have to pass the tables of people still trying to convince you to vote for their party. You never know, there is such a thing as recency bias. Maybe you saw some cool and fun people at the Meretz camp (liberals) and you think: “I like those people, maybe I’ll vote Meretz”.

So once you go in, you show your ID which is given to every Israeli like a Social Security card but more secure, so it’s not an added process and does not inhibit anyone from voting because everyone has one. They check against a list which you are registered on based on where you live. The nice people tell you which classroom to go to, there’s one polling booth in every room. Then you wait in line and go into a room where four or five people sit, check your name and give you an envelope.

You take that envelope to the booth and there you see a giant poster with letters and the corresponding parties on them and in front of you is a wooden rack with pieces of paper with the letters on them. Now you choose which piece of paper you want and you seal it in the envelope and drop it into a big blue box.

That’s it! Well, if there are mayoral elections, you get two envelopes but there’s no reading of propositions on this or that, no bonds, no fifty judges, just a party and the party has already chosen people who will be part of the government based on percentage of the vote that they get. So long as they get a few percent they get one person, if they get more they get more. One party never gets all seats so they have to make a coalition. The person that gets the coalition, becomes the Prime Minister.

So simple! And yet, perhaps too simple, because here we are, the fourth election, and it is possible, that there will be a fifth as no one seems to have a majority coalition! The parties that run include socialist, capitalists, conservative, liberal, Arab, and religious Jewish parties and everything in between. Usually, it’s the conservatives win although back in the day, it was Labor (semi-socialist) that were the main winners.

NOW BACK TO THIS ELECTION

Lot’s of people think that the person who gets the majority of votes is the prime minister but that’s not how it goes. So in this election, almost 70% of Israelis voted. Of those, only 25% of Israelis voted for Netanyahu, 25% for Gantz, So 50% of voters did not vote for either of them, so to say “Israelis prefer Netanyahu and his policies” is false, only a minority do.

About the person who was once a leading candidate but after four elections, not so much: General Benny Gantz. Gantz was a general and chief of staff so to say that they voted for Gantz over Netanyahu out of a sense of security doesn’t make sense. Israel is in general a very religious and conservative society. Due to a poor economy and lack of jobs and expensive life, nearly a million educated Israelis have left Israel and settled in Europe, US, and Canada. Because Israel does not allow Israelis outside of Israel to vote, means that Israel’s politics are dominated by conservative and religious factions.

Netanyahu, who has been in power for over 20 years (not consecutively) always makes a coalition with those factions and discourages Arab votes through attacks on Arabs in the media and actions like hidden cameras that he had installed in Arab villages to prevent “voter fraud” even though the only place where we have had voter fraud is in the ultra-religious communities.

This time though, Netanyahu decided to take it a step further and include a Kahanist in his party. Itamar Ben Gvir ran on a complete racist ideology that sadly, some, a minority of Israelis share. Kahanism is like the alt-right of Israel and Netanyahu in desperation to form a coalition, brought this guy in. Although to be honest, the things that Netanyahu says in Hebrew, it is not that surprising he would bring in Itamar.

The man who could have helped him was Naftali Bennet, leader of the new right party. Bascially he is a right-wing hawk or a young Netanyahu, but to Bibi’s bad luck, Sarah, Bibi’s wife hates Bennett and so since what she says, goes, now he’s without a coalition.

Back to Gantz joined Yair Lapid to create Cahol Lavan, which is Hebrew for the Blue and White party. Yair Lapid is a politician that here is seen to be like an Israeli and semi-liberal Paul Ryan: attractive, speaks well but little substance. The majority of the people who I spoke to who said they are voting Bibi, is because they feared Yair Lapid becoming a prime minister. Although after three failed elections, people seem to think that Lapid might be stronger than Gantz so in this election: Lapid seems to have gotten some extra votes.

I saw Gantz and Yair speak at a hotel his first time running for the PM. Gantz was good, he offered a warning of what may happen without him. He did not speak well of what he may offer but Neither did Netanyahu, but Netanyahu gave a scarier picture than Gantz. Gantz would have made a decent prime minister but Israeli politics is far more difficult than American because you have to control a coalition, you do not become the face of your party. He had a problem with that. He promised that he can work with anyone, but inspire by winning the same amount of seats as Netanyahu. I think he lost that first election because went to celebrate while Netanyahu probably continued to make phone calls and secured himself all the other parties before Gantz even had a chance.

This is why I think Netanyahu won. He wins even with a tie because he gets to stay. And he wins not because of security and not because of “existential threat”. Fact is, Israel has peace agreements with nearly all of its neighbors that could attack Israel and has not had a war or been attacked by another country since 1991. This year they created three more peace deals with countries that Israel has never fought. It was more like trade deals than peace deals.

To explain this in detail: while in America it is often thought that Israel is surrounded by enemies and fights for its survival every day in a never-ending war, the reality is that today, Israelis do not think of other countries as a threat.  Actions from Hamas like the bombing of areas near Gaza are unpleasant and dangerous but are not existential and Bibi has not actually done anything to reduce them. In fact, usually, the terror flare-ups help Bibi and Hamas, for Hamas to keep power and for Bibi to use them as a reason for keeping power, this is why Hamas still exist, they are very useful to him.

So here we are, fourth time was not the charm and we have a situation as crazy as any story by Josephus (minus killing family members). Perhaps I’ll have a chance to go to Israel again and vote in a democracy that doesn’t actually create a government. If only we were as brilliant as all the conspiracy theories say we are, with our magic abilities to control the world. Because if that were the case, maybe we would finally find a way to control our own country.