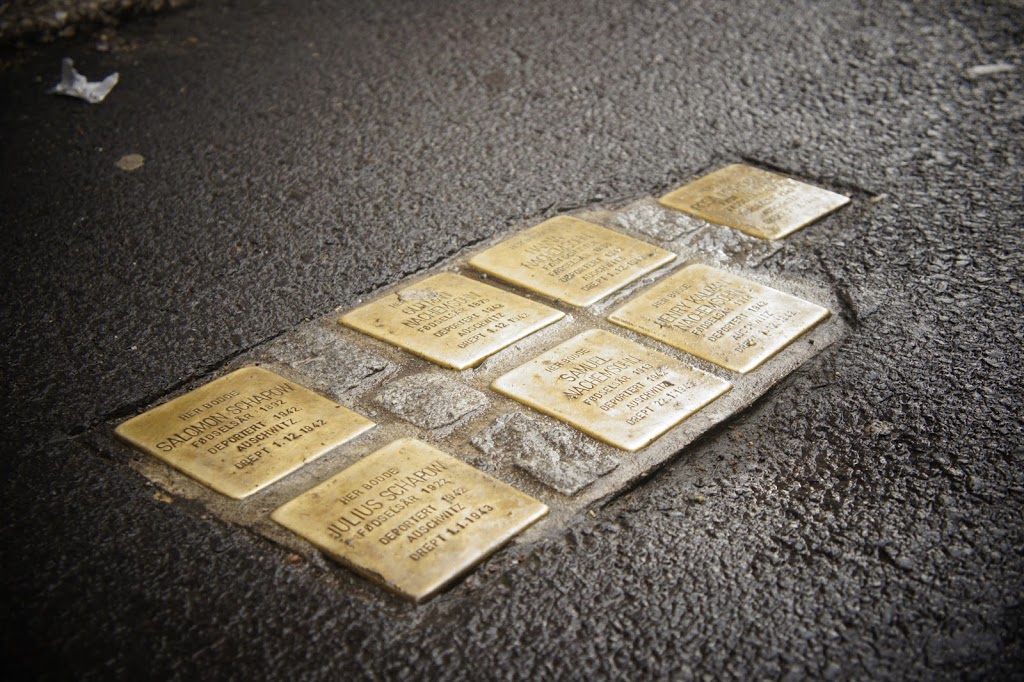 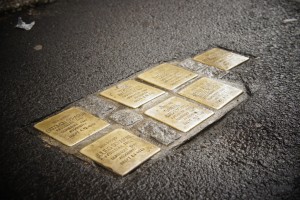 Aside from golden bricks pockmarking sidewalks, a museum a synagogue and chabad, there is hardly a trace of  Hebrews in Oslo. The golden bricks in front of buildings signify where 700 people were taken away and never came back. The community that survived by going to Sweeden or hidden through marriage or by relatives, thrives in an area not far from city center. The original synagogue, built in the Lithuanian style is not fancy from outside or inside. It is white with a slanted roof, a turret on the side and a large modern Jewish Life building attached on the other. An elderly home is on the other side of the building near the turret where according to the security guard “it is nice and doesn’t smell like piss” as others apparently do. A couple elderly residents observed me while I sat on concrete blocks protecting the entrance to the synagogue and discussed the Torah with my friend Aslan, a friend and Russian-Muslim resident of Norway.

Inside the synagogue are large but modest inscriptions, simple yet intriquite carving and a uniquely raised ark of torah above the bimah that is at the front of the congregation where women can see it at their level and marvel when the torah is taken out on Saturday.

The service is quick and simple on Friday and afterwards I am invited by Claude and his son Joni for dinner at their modest apartment a few blocks away. Claude emigrated to Israel from Gherba Island of Tunis and then moved with his Norwgian Jewish wife to Oslo. We sit late into the night and I don’t dare use a phone let alone my camera to catch the warm light reflecting off the clouds, streaming  onto the long table that is always awaiting guests with “food enough for everyone.” They tell me about the life in Oslo, how easy it is to make money, how few work in Norway, how the community is small, tight knit but mostly secular. Joni speaks great English while his dad has to be translated as his Tunisian French is hard for me to understand and his English is even harder. Joni and Claude speak Hebrew to eachother. They wear kippas. We wash our hands, break challa and sing a prayer at the beginning and the end.

On Saturday it is long, with a sermon read by the Rabbi’s son, singing by the Hazzan (there are two, the primary Hazzan with the great voice is out in Israel). Hazzan is the reader of the torah and in other countries he is called the Cantor. I am given a small metal plate about the size of a dog tag with a hebrew inscription stating I am to be the torah bearer. I go up to the top of the stairs and turn around to see the congregation bellow me. Yankel tugs at me and says that I “..can look at the women later.”
“This is the largest torah we have and we are reading from two books today. One of them will sit bellow. I’m thinking of my victim now.”
I get the big Torah and walk down the steep staircase with the giant scroll on my shoulder and then sit for twenty minutes behind the readers as they go one by one to pray before the torah. One of them is Jacob Kahn. Son of Siggur Kahn who I chatted with on and off. Siggur is a medical engineer who makes heart valves. Jacob is an engineer as well and we chat during prayers about his life and how his daughter is about to get her name. While I sit with the Torah he comes up to pray and she is given her name: Ada. I chat with Jacob’s brother as well who had been to San Diego with his girlfriend on a road trip. Her grandfather is there, quiet old and hunched, escaped from Hungary in ’56. At the end of the service, the oldest and the youngest go up to the ark and sing in front of the congregation. “We like to include everyone, especially the kids so that they have good memories and want to come back.” Said the Hazan.
I talked to Sharon and Rotem afterwards at the Kiddush downstairs where there is a food spread and coffee and twice as many people as there were during service and Claud’s paintings lined the walls. Sharon and Rotem are half Norwegian and spend their summers in Norway while living in Israel. And they are invited along with me to Claud’s for lunch again. Before I go I speak to a some more people about life in Oslo. There is an older gentleman who was from Hungary as well and survived Aushwitz. He came to the service with a priest. The priest liked the service but didn’t like the disrepspect of people walking around and talking. “God doesn’t need to hear our prayers.” He said to the priest. “It is more important for you to go and ask someone about their sick mother across the synagogue than to pray. It is more important for you to go and say hello to a friend you haven’t seen in a long time or ask for help a question about Torah than to pray along.” The priest said had to leave, he couldn’t take it, he said he had to think about this.
We left in light rain with Claude, Rottem, Sharon and Joni back to the fourth floor apartment with walls covered with Claudes paintings. He was educated as an artist and shows me a lot of his sketches. We eat amazing Tunisian food and tell jokes at the table as we sip on Araq and Glenlivet Whiskey. “Do you go to a Synagogue?” I ask Sharon with long dark blond hair. She could be confused for a California girl. “No but I will now, I liked this. In Israel people go but don’t stay after,  they don’t talk.” They don’t have to in Israel, they are all Jewish and Israeli like everyone, they don’t have to look anywhere to belong unlike the Jews of Oslo who are a tiny minority in a hostile to ambivalent city. Some arabs hate them and the Norwegians so secular that they just don’t understand. My muslim friend said of Jews and Norwegians that he “doesn’t care what they [Jews] believe, at least they believe in something.”
I leave the Mozich home with a little bit of saddness, this community in one of the coldest parts of the world, is one of the warmest ones I’ve met.
Share on Facebook Share
Share on TwitterTweet
Share on Pinterest Share
Share on LinkedIn Share
Share on Digg Share