It has come to my attention that Abraham, one of the founding members of Kechene community in Ethiopia passed away this week. He was large part of the Kechene community, a radiologist and electrical engineer. May his memory be a blessing. 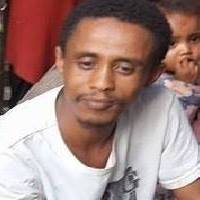 I knew Abraham when I was a small grade. I knew him because he was a bookworm. While I was playing football, I remembered him in my photographic memories that he was holding books all the time. He was my passion, he was the one who forced me to believe only in reading and digging something constructive from every pages of the book that we laid our eyes on. He was the one who gave the perspective and the angle on how to be Jews for real. The first time I saw “Abrish” in our synagogue, I murmured “now is the time to fight for the community with intellectual means.”.. but we couldn’t give him the true chance for what was inside him. He trilled me with his rigorous and meticulous remarkable thoughts. On September 2013 I had a very nice discussion with him and throw to him a simple question:

Me: “Do you think that we will go to Israel?”
Abraham: “Oh Yes but the way we will be to Zion matters. If we change our selves they will come and beg us, if not, they will still come and take us but that is real trouble for the community as a whole and the country itself …At least at these hardest time for Israel we have to be a back up not political chip.”

Those words were the only from my beloved Zionist Brother Abraham. He have had many projects, ideas and motives merely for the community but he was looking resources to implement those organized thoughts… He was shouting loud for the intentional deaf crew, while we were fighting for useless issues, while we were giving full concern for baseless meetings and gala, we never even noticed him while he was sitting beside me and we members of Ethiopian North Shewa Zionist Organization. He was [a] loaded bullet for the exact target but we failed him. We failed him for real. Lets unite for the last time and mourn together for his goodbye. May his memory be blessed like our patriarchs Avraham, Yitzhak and Yaaqob. Hashem called him and hopefully listen him better than us. It is painful for me to say Goodbye to my true, real, genius, exuberant and Engineer Brother Abraham Teshome….Baruch Dayam Haemet!!! Lets Mourn together