“Oh! You’re Jewish? Does that mean you don’t eat pork?” is a question Jews often hear when they surprise someone with their Jewish background. But Hanis is the Carnitas King, the Prince of Pig, the undisputed master pig chef of San Diego. He will not only eat pig but he makes pig so good that I’m willing to bet that Bal’ Shem Tov’ himself would say what I said at first bite: ” Oy that’s good,” (I didn’t say oy) and then for the first time in his life would eat the rest of the bacon, pulled pork triple decker without a twinge of Jewish guilt. I mean the fried pork over pulled pork under bacon topped with pickle on that soft bun… My mouth is watering and I just ate that!

Hanis’s first brush with pork was making a BLT in High School in La Jolla, California. His mom walked in on him making the sandwich for his friends and it nearly gave her a heart attack, she may have preferred to have an American Pie scene rather than this. In fact the pan was thrown away to keep the house Kosher. Sadly, the pig was not the worst thing to hit the family, many divorces and re-mariages have broken the family apart. It has been years since Hanis’s last seder.. But the one constant that’s been in Hanis’s life is well cooked pig. And it wasn’t out of rebellion or hate for Jewish culture, he just really loves the animal, in fact Hanis’s Carnitas’ Snack Shack has an apostrophe for a reason, it’s named after Hanis’s pet pygmie pig. Hanis says: “I just realized that the reason for the Pork prohibition is the health issues, but we don’t have that anymore. We can cook it safely and enjoy it”

From the outside it looks like just a tiny shack but at the back a wooded and shadded terrace with a larger wooden structure and many tables opens up including a bar and dividers with plants and veggies. On top of the shack with a simple ordering window facing the busy University Ave. is a giant iron pig made out of metal plates. 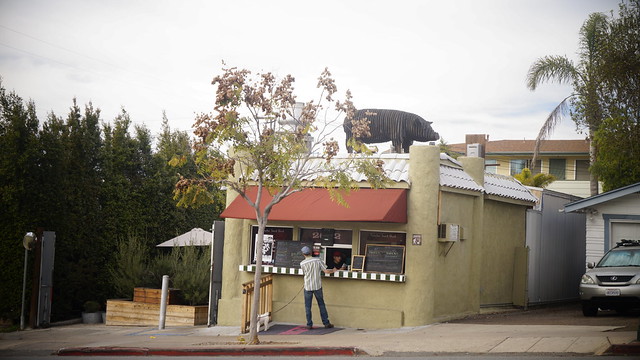 When I approached Hanis, he was out back near the bar, busy filing out stacks of checks for charities. He wore a shirt with a pig dissected into parts labeled by how delicious they are and pig tattoos cover his arm and neck. In fact, it was his tattoos that gave away his love to his parents, at a family dinner a tattoo showed itself from underneath his sleeves.

The tzedaka (charity) is strong in this one. “I like to donate local, I see the kids I see the effects.” He tells me. With his goatee and shaved head, he reminds me of San Diego radio DJ Tim Piles, except his canines, sharpened with years of eating meat give him a little more edge. Hanis easily interacts with his staff and as people come in he is friendly and gregarious. He has a very San Diego feel to him, very relaxed, no pretexts.

He does have that Jewish intensity with regards to food, especially with: pork. With his grandmother’s cooking lessons applied to the hog made him the man to see in San Diego if you wanted to eat good, delicious pork. Coming from a tradition obsessed with food and good, clean food, he visits farms and makes sure that not only the farms are good for the people but good for the pigs as well from how they are treated to what they eat and drink; no detail is too small going as far as growing his own veggies at the restaurant. 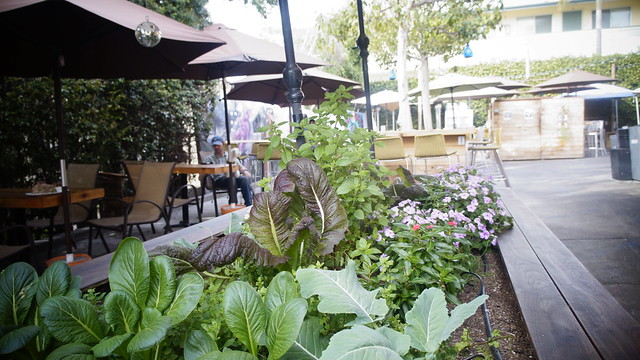 At the same time, Hanis has that Jewish ability to bring people to his side. We’ve survived this long outside of Israel thanks to that ability to Schmooze. He treats people well, like family he says, so much so that some of his cooks and workers went to work for him after the closing of the white tablecloth Kensington Grill where Hanis was the executive chef and stayed with for as many as 9-13 years. He shmoozes with the Jews like Sam the Cooking guy organizing Jewish cookouts and feeds any and all events where they need a donation of food or catering, smart enough to realize that a little generosity pays back dividends. When someone drops out, Hanis is there with his food. 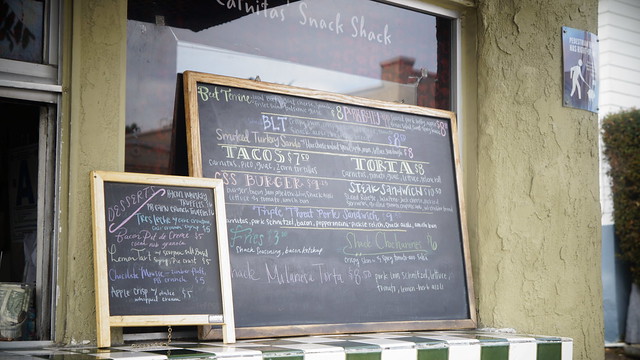 At the end of our talk, I had to try his cooking. I went to look at the menu and it was a good mix of San Diego Mexican food infused with Hanis’s touch of pork. There were tacos, burgers, sandwiches and even vegetarian options with plenty of local draft beer options. I got the Triple Threat, a hamburger bun, toasted golden, covered in oil, with fried pork, pulled, pork, and bacon all in one. I looked at it, I ate it and only then did I realize, that for the first time in my life, there was zero Jewish guilt…  Hope you get to eat an awesome Pork seder Hanis, you deserve it. 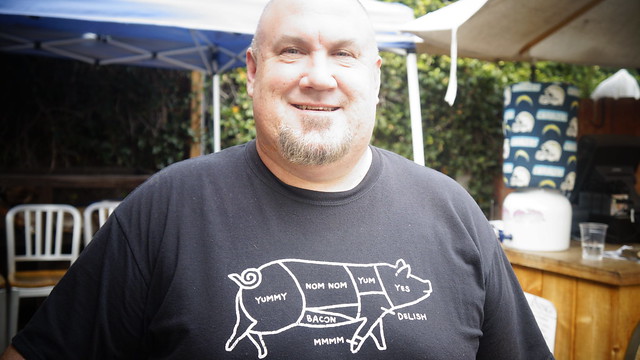