Nathan Road, the backbone of Hong Kong, was named after one of the city state’s first governors, Sir Mathew Nathan (a man of Jewish descent). He was like the Khadoories and Sassoons, one of many Jews who have lived and worked in Hong Kong, taking part in a little-known aspect of the history of the illustrious port city.

Hong Kong is a city divided into three parts: mainland, peninsula, and island. Its small size provides ample space for the mix of local and international communities. On the mainland is Kowloon which is the cultural heart and where most of the Chinese reside. The island is the financial district where most of the ex-pats reside. The island has large hills and the skyscrapers are built upon these hills like lego towers, overlooking the swath of water between the city and the mainland. Half of the island is undeveloped, with lush forests with a botanical garden in the middle of a concrete jungle. The serpentine roads coil their way across the land and some stairwells and escalators hop over the road serpentine, leading one from the top to the bottom through the residential homes, businesses, and temples of the island.

On Robinson road is the Ohel Leah synagogue. Built in 1901 on the land bequeathed by the same wealthy David Sassoon of India and Baghdad, who built an enormous empire with his sons across India and Asia at the beginning of the century. Inside the synagogue, you will find sharply dressed businessmen from all over the world. The building is beige, with double domes at the entrance on the outside and intricately carved, dark wood inside. The black suits and white shirts of the businessmen give it a faint sense of the underworld. Even the prayers are not so much singing, but a mumbling punctuated by long silences. This feeling is not entirely inappropriate as the fortune used to establish it came from the Sassoon’s dealing as a middleman in the trade and sale of opium, among other more respectable trades. 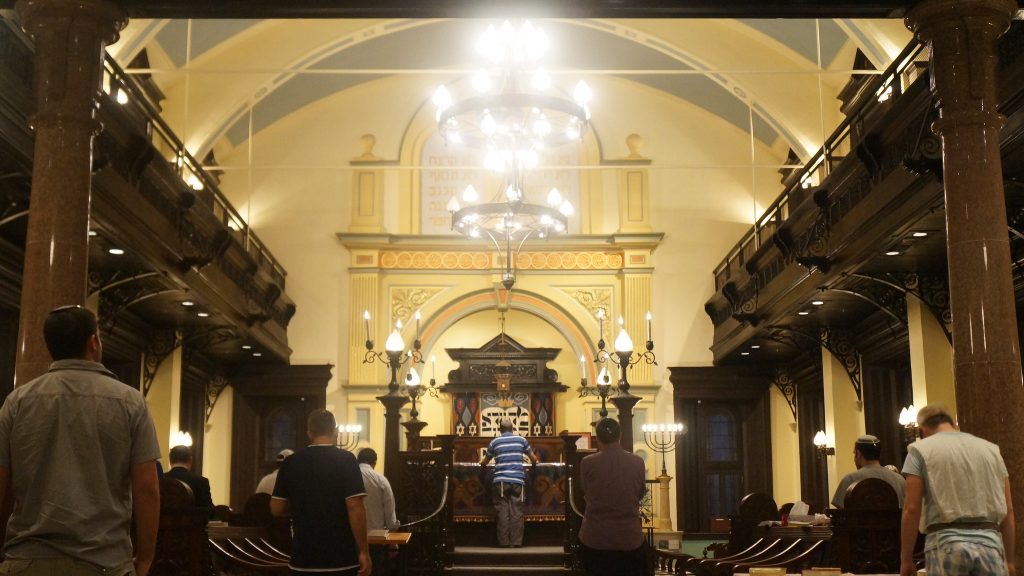 Because land is expensive in Hong Kong, when the building next door bought some of the lands from the synagogue to build a large luxury highrise, it gave the first four floors as part of the deal with the synagogue. Those floors house a school, a community center, a pool, and a banquet hall. Inside the banquet hall, one can go eat breakfast and dinner, and on Sundays, for a mere $40, you can get an all-you-can-eat buffet complete with lamb, steak, sushi, and a table full of desert. Businessmen and their wives talk inside and outside, boys chase a soccer ball using the entrance arches of the synagogue as goalposts while girls play netless volleyball with big red balloons. On the other side of the synagogue, boy scouts sit in a circle doing push-ups overlooked by skyscrapers, and overlooking the island below are the gardens cut into the hillside.

On the other side of the lush botanical garden at the center of the skyscrapers is the Lubavitch Chabad of Hong Kong on McDonnell road. Rabbi Mordechai has lived in Hong Kong for 26 years and established the first Chabad in Asia. He has a long, thin Fu-Manchu beard and his eyes seem relaxed, giving them an Asiatic appearance as if Hong Kong has the secret power to change peoples’ faces as well as their thoughts. 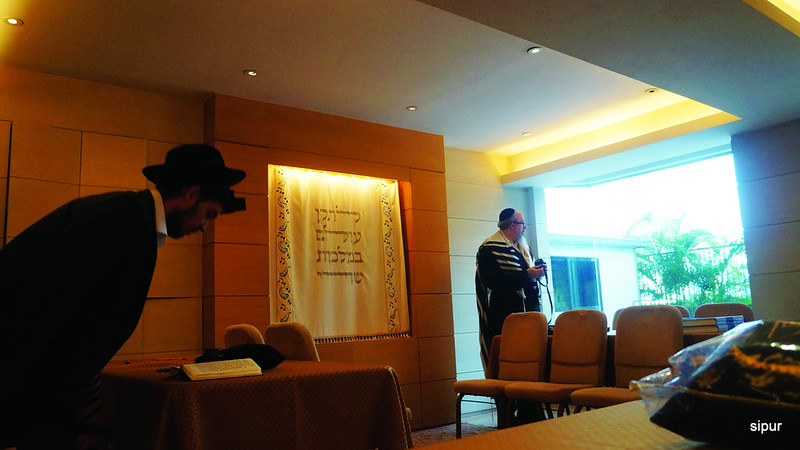 His wife is serious but friendly and their kids are curious and confident. They sat on the couches together, Rabbi Mordechai with his daughter in his lap and his wife on another couch talking to her son at the end of Shabbat dinner; relaxed and comfortable with each other as if the guests had all long gone. They are a warm family, a little bit older than other Lubavitcher Rabbi families I’ve come across. Their kids feel at ease respectfully disagreeing with visitors twice their age, as well as their parents. It is a more familial setting as opposed to the Chabad on the Kowloon side, which is more for travelers and backpackers.

The Friday night meal is set in the dining room around a large table with a piano on one side and couches with a large bookshelf on the other. At the table one can meet exchange students from around the world, businessmen in town for trade shows selling light bulbs, or Israeli Qi Gong and Tai Chi teachers. That day I met Jews from Sydney, New York, Los Angeles, and many, many Jews from France. You can see the world in the community of Hong Kong. In the dark make-up of Ethiopia and Morocco and the light make-up of the Russians, the features of old Israel stand combined with the features of the rest of the world. 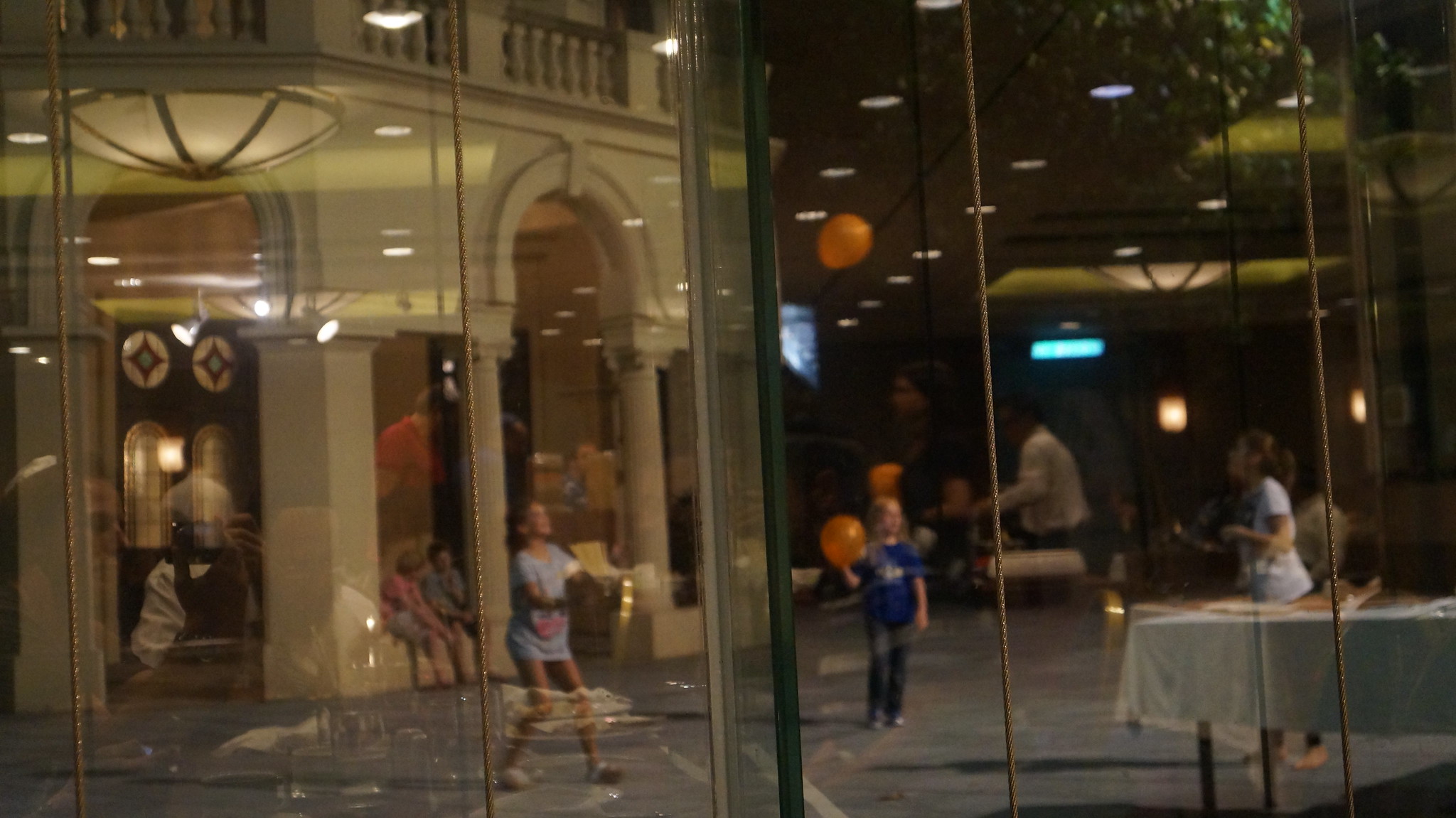 It may be the last few generations that retain their appearance of the land that gave them shelter in exile because in two or three generations, as Jews mix and intermarry and the barriers of distance disappear, who knows how they will look? But the character of their personality, the type of people they need to be to move so far from home, and the influence of a place like Hong Kong will always leave a mark on them.

Being so far from home, you see them come together at the synagogue. They come together to find strength and comfort in a community that they understand and that understands them while living in a foreign and strange city. No one knows what will happen when China takes over, but for now, Hong Kong still allows freedom of religion and congregation, which is the source of strength of the Jewish people and Jewish community just as it is for Islam and Christianity.

Finally, nowhere is the confluence of the new Judaism felt more than at the Zion synagogue in Tsim Sha Tsui on the peninsula. On the fourth floor of a mall, next to banks and luxury stores, the cherry-paneled walls make it look like an upscale restaurant that indeed occupies half of the space of the synagogue providing kosher meals at a hefty price to house the expensive synagogue and place to pray. There you can find mostly businessmen staying in the area. Heading the congregation is a kind and wise Sephardi Rabbi who had been in Hong Kong for 18 years. 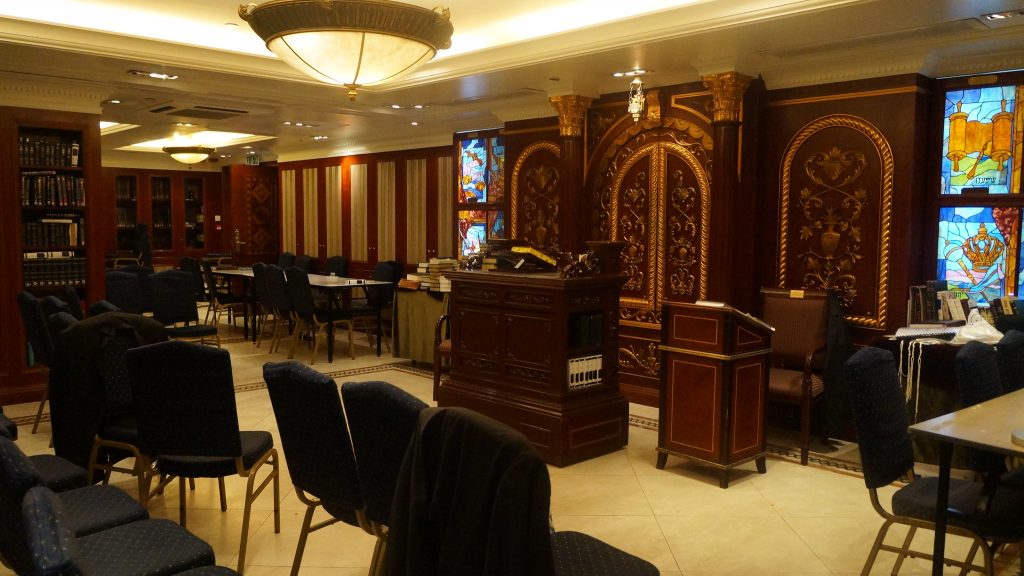 The synagogue is attempting to raise $5,000,000 for a permanent place but with few permanent members and relying mostly young on temporary businessmen as members, it is a tough road to climb, but I have faith that they will do it. As I left Hong Kong I had the pleasant thought that atop materialism there is room for spirituality. It is nice to see that with all the differences on the outside, there is a place in the world where it is the inside that counts.

People say that the world is materialistic but seeing so many places of worship, it begins to be evident that the rise in materialism creates a greater need for spirituality. The rise in cities does not destroy communities it gives rise to more communities that resemble nothing of old physical space and everything in a spiritual sense. 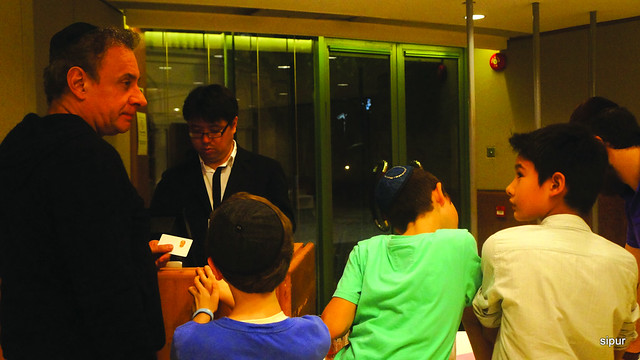